Mound of the Hostages - Hill of Tara 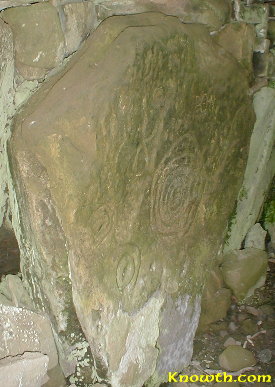 The megalithic passage tomb called the Mound of the Hostages (Duma na nGiall) is the oldest monument on the Hill of Tara dating back to between 2,500 BC and 3,000 BC. The passage, 4m in length and 1m wide, was subdivided by sill stones into three compartments each containing cremated remains.

A wonderfully decorated stone can be viewed from the entrance gate. The engravings may represent the sun, moon or stars as religious symbols or maybe the stone was used as a prehistoric calendar. Drawing of decorated orthostat.

The term passage tomb is disliked by those who consider megalithic mounds to be have been primarily astronomical observatories or sacred temples. In the case of Tara evidence of at least 200 individual cremations were found, so the passage tomb description is appropriate.

The hills at Loughcrew can be seen to the west from the top of the mound. 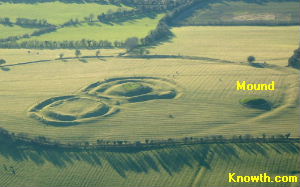 Long after the megalithic mound was constructed Tara became the seat of the High Kings of Celtic Ireland. The most famous of these was Cormac Mac Airt who reigned in the third century AD. One of the ring forts within the large hill fort known as the Royal Enclosure is known as Cormac's House. The other ring fort known as the King's Seat may actually be constructed around a prehistoric tomb. 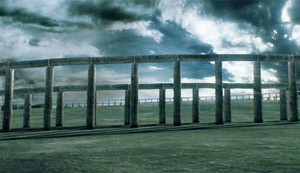 Ireland's Stonehenge, a 4,500-year-old structure at the Hill of Tara in Co Meath, has been re-created by archaeologists and computer-graphics experts. They have built a representation of a huge, wooden monument that appears to have been used for inauguration ceremonies and pagan burials of Ireland's high kings. More ... 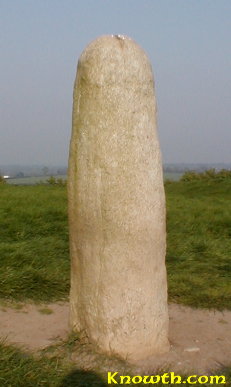 The standing stone known as the Lia Fáil, though erected on the King's Seat or Forrad around 1824, was originally sufficiently close to the Mound of the Hostages passage tomb that the two were traditionally considered to be an ensemble. This stone may once have stood in front of the entrance to the passage and, like the two pillar-shaped stones that stand in front of both the eastern and western tombs at Knowth, it too may be contemporary with the tomb and belong to a tradition of erecting standing stones around or in passage tombs.

The Lia Fáil or Stone of Destiny which stands about one metre in height is considered by some to have been a fertility symbol.

According to legend on the inauguration of a worthy high king the stone would roar its approval. 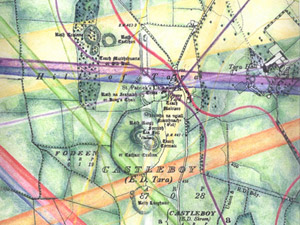 The Earth Energy Fields of the Hill of Tara display a high degree of spiritual focus. There is a central silver line running through the Banqueting Hall - an ancient initiatory linear earthwork - the King's Chair, the Mound of The Hostages which is an ancient chambered cairn, and Teach Cormac where the High King would reside. This silver energy gives the potential to access higher spiritual awareness.  More ... 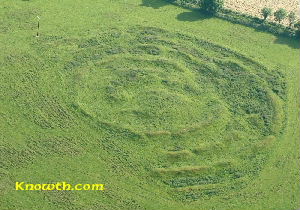 Tlachtga on the Hill of Ward near Athboy is 12 miles from the Hill of Tara. Tlachtga dates from approximately 200 AD and is named after a sorceress who died there giving birth to triplets.

Tlachtga is clearly visible from Tara and the fire lit on the eve of Samhain may have been a prelude to the Samhain Festival at Tara.  More ... 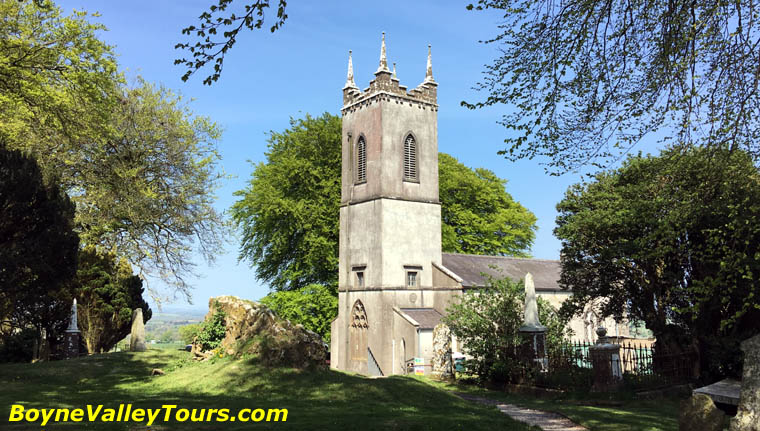 Saint Patrick's Church and Graveyard on the Hill of Tara.