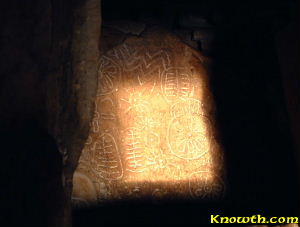 Clusters of Megalithic Cairns are dotted around the Slieve na Caillaigh hills at Loughcrew, the main concentrations are on Carnbane East where Cairn T is the centrepiece and Carnbane West where Cairn L is located.

The illumination of the passage and chamber at the Winter solstice sunrise in Newgrange is world famous. Less well known is the Equinox illumination at sunrise in Cairn T at Loughcrew. The backstone of the chamber is illuminated by a beam of light at sunrise on the Spring and Autumnal Equinoxes.

The sun light is shaped by the stones of the entrance and passage and descends the backstone while moving from left to the right illuminating the solar symbols. Visitors are welcome to walk up Carnbane East to Cairn T, a ten minute walk up a grassy hill from a small car park. During the summer months there is a guide at Cairn T, at other times Cairn T is locked, so to get inside collect the key at the nearby Loughcrew Gardens. 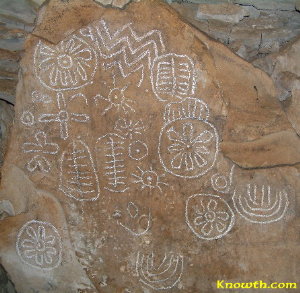 At Cairn L on Carnbane West the sunrise at Samhain (early November) and Imbolc (early February) illuminates the passage and chamber, lighting up the limestone standing stone in the cairn. The owner of the land where Cairn L is located does not allow public access to the site.  More ...

Cairn T or Hag's Cairn is of similar design to Newgrange. Traditionally described as a Passage Tomb, the wonderfully decorated backstone shows that the Cairn has a clear astronomical purpose.

A beam of light from the rising sun around the time of the March and September equinoxes is mapped on the backstone of the Cairn. The event lasts for 50 minutes and was captured on video on the morning of March 23rd 2005, view a time lapse version of the Equinox Video (compressed form 50 minutes to 1:46). 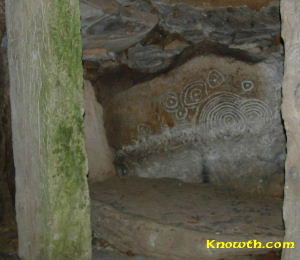 The interior of Cairn L

A freestanding limestone monolith or menhir is positioned inside the chamber (on the left of the image). Martin Brennan discovered that the six foot high monolith is a marker for the cross-quarter days Samhain (early November) and Imbolc (early February), when the sun illuminates the stone. 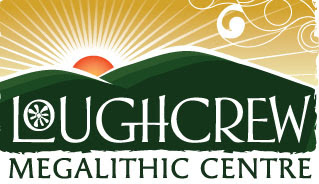