The first historical record of the Celts was by the Greeks about 700 BC, the Celts were a loose grouping of tribes that lived in an area north of the Alps around the Danube river in central Europe. Over the next few hundred years they spread east and west across Europe. The Celts first arrived in Ireland about 500 BC, there is no reliable information on how or when the Celts became the dominant Irish ethnic group. It is thought that the Celts arrived gradually, spreading slowly across the country, a process that could have taken several hundred years. By the fifth century AD and the arrival of Christianity, the Celtic language was being spoken all over the island of Ireland.

Some Thoughts on the Celts - an article on the Celts by Desmond Johnston covering their origin and background, Celtic language, Celtic influence in Europe, the Druidic system and Celtic religion.

Ireland and the Celtic Culture - from the book In Search of Ancient Ireland by Carmel McCaffrey and Leo Eaton.

At Newgrange the tri-spiral design is often referred to as a Celtic design, however it was carved at least 2500 years before the Celts reached Ireland. Megalithic mounds entered Celtic mythology as sídhe or fairy mounds, Brugh na Bóinne (Newgrange) was the home of Oengus (Aonghus) the god of love. It was said that Oengus never aged while he lived at Brugh na Bóinne.

The Celtic Race never really existed in the way that we understand the term today. They were a loose amalgam of tribes, communities and disparate groups that come together for shared purposes such as defence, worship, trading and hunting. Unlike the Classical civilisations of Greece and Rome the Celts left little behind that scholars today can classify with any degree of certainty. The Celts were primarily of an oral tradition, however they did have a from of writing call Ogam or Ogham.

The Celtic ogham script was used in Ireland from the fourth century AD to the eighth century AD. The script consisting of stokes or notches where were cut into wood or along the edge of a standing stone. It was a clumsy method of marking, based on groups of one to five stokes for each letter, and was used only for short inscriptions, such as grave markers or memorials. It is speculated that the script is much older than it seems, and was originally based on a type of sign-language used by the druids, using the five fingers. 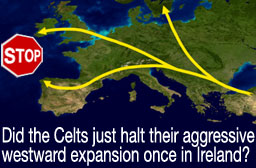 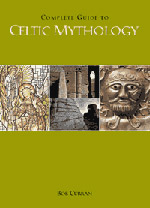 Complete Guide to Celtic Mythology by Bob Curran, a very good introduction to Celtic Mythology. The book it is written for the general reader and is well laid out with good illustrations. The Chapter heading are: The Druidic Tradition, Legends of Saints and Holy Men, Giants, Monsters and Fairies, The Land Beneath the Waves, The Otherworld, Spirits of Earth and Air, Shrines and Sacred Sites, In Search of Ancient Heroes and The Great Wheel of Existence.
Google Books Listing. 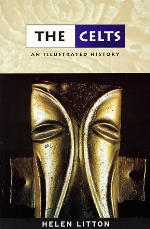 The Celts - An illustrated History by Helen Litton, an excellent book on the Celts in an Irish context. From Julius Caesar writing on the Celts to evidence of beautiful Celtic art, ring forts, bog bodies, bronze sword hilts, strange wooden idols and the cult of the human head, the author deals with the known facts about the Celts and comes to grips with the arguments about the true extent of Celtic impact on Ireland. The period covered is from the 8th century BC (Later Bronze Age) to the coming of Christianity to Ireland, in the 5th century AD, a period of more than one thousand years.
Google Books Listing.