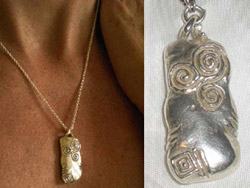 Her designs are inspired by her upbringing in the celtic tradition and by megalithic symbols, especially the spiral symbols at Newgrange. Dorothy features interlace knotwork and spirals (infinity symbols) in her jewellery, because these designs incorporate an ancient tradition with a uniquely modern style. Every piece is handcrafted and unique. 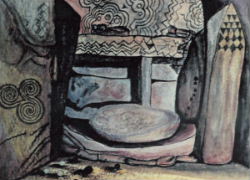 Sally McKenny's art is inspired by the passage tombs at Newgrange, Fourknocks and Loughcrew in Ireland's Ancient East. Her search for sacred space through the discovery of the ancient and holy sites of Ireland takes the form of a journey from the bright sunshine of the American South West to the enveloping mists of Ireland's ancient holy places. 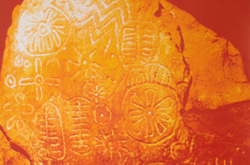 Loughcrew Cairn T by Padraig Conway. Actual size (32 x 44 inches) reproduction of the backstone in Loughcrew Cairn T in Ireland's Ancient East. This high quality silkscreen print is very collectible, limited edition prints are for sale at 200 Euro each. This is a labour of love for Padraig who is only interested in covering his costs. Email enquiries to 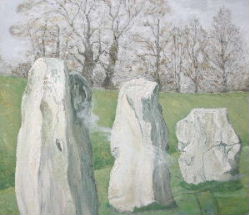 Avebury Seasons by Ric Kemp, a cycle of eight paintings based on Avebury in Wiltshire. Images of six of the eight paintings are displayed, Samain and the Vernal Equinox are yet to be realised. 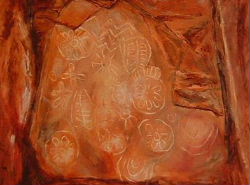 Helen Gavigan works in watercolours, acrylics, oils, print and mixed media. She often takes a stone symbol or pattern as a starting point and allows her work develop from there. Helen is originally from Co. Meath where the cairns at Loughcrew and the passage tombs of the Boyne Valley have inspired her work. 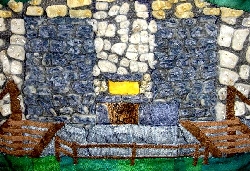 The quilt was started at the beginning of September 2004 and the front was finished by the Winter Solstice 2004. Except for the mound itself, it is made of quilting blocks named "Irish chain". The border has some of the petroglyphs found on the kerbstones around the mound. The quilt measures 55 x 25" (137 x 62 cm). 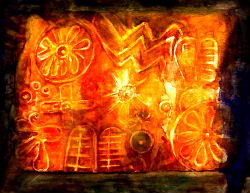 Wonderful watercolour of the equinox sunrise on the backstone of Loughcrew Cairn T. 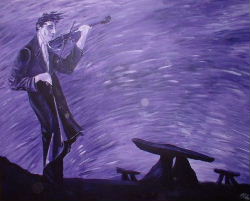 Fiddler & The Dolmens by Oliver Curran, painted in acrillic oil on stretched canvas. The fiddler laments the warriors graves of Ireland's ancient past. 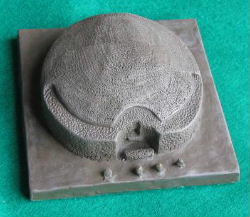 Handcrafted paperweights and ornaments - no longer available, so all we have to enjoy are the images. 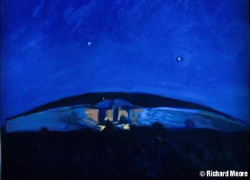 Richard Moore has been painting in the Boyne Valley for many years. He works mainly with oil, and sometimes with watercolour and ink. Richard's keen eye, coupled with his great appreciation of the natural, and manmade, environments, combine to give us a unique portrait of the ancient sites of the Boyne Valley. 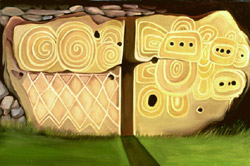 Paintings by Judith Quain - While on a tour of Ireland's megalithic tombs Judith Quain discovered the beauty of an ancient art of carving symbols into stone. For centuries, myths and legends have celebrated their power, but she was intrigued by the revelation that these ancient cairns, standing stones, and stone circles may be the oldest astronomical observatories in the world, predating Stonehenge and the Egyptian Pyramids. 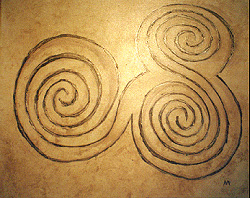 Newgrange and Knowth Petroglyph Paintings by the Artist M.P.Gollon. The Artist has painted the images, hoping to give some sense of this remarkable space/time to people who may not have the privilege of experiencing them in person.