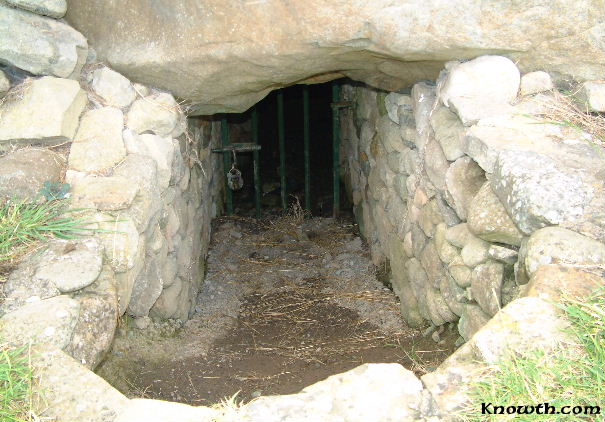 Here you can see one of the souterrains built by the Early Christians to store food. The word souterrain comes from the French phrase, sous terrain, which means ‘under ground’. Many were used for hiding but they were also used to store food because, like the original passages and chambers inside the mound, they remained dry and at a constant temperature of 10º Celsius. They also kept out flies, dust and rats. But the most important function of the souterrains would have been to hide the food.

This was very important here at Knowth because we know from historical documents that Knowth was raided by the Vikings at least five times during the ninth and tenth centuries. Most people assume that when Vikings attack a site they are looking for treasure, gold, the cover of the Book of Kells and maybe the ladies. In reality, Vikings often raided for food. The people of Knowth could not afford to have their food supply stolen, especially during winter, so they hid it in these souterrains, and covered the entrances over. So when the Vikings attacked the food was saved.

I am now standing inside the walls of a Neolithic house. These wooden posts in the ground mark where the archaeologists uncovered post holes which formed the perimeter of the house, and this house has been reconstructed at the Visitor Centre using the information found here. Carbon-dating puts this house at 3,500BC, five hundred years before the building of the tombs themselves. Of course, like all the other dwellings for the living of this community, this house left no trace above ground and would not have lasted very long. Nor would it have been very comfortable, or even all that safe: one stray spark from the fire inside would destroy it in minutes. But yet they built these magnificent monuments of stone for their dead which have lasted for thousands of years, and will last for thousands more.

This is the most striking piece of evidence for their commitment to their dead and to their belief in the afterlife. They spent 50 years building just the main tomb, travelling up and down the Irish coast in tiny coracles, taking their lives into their hands with each journey. And they dragged hundreds of 5 tonne boulders up here for the kerb on wooden rollers. And even today, fifty years is a long time, but five thousand years ago, it was more than a lifetime. The average life expectancy in the Neolithic was only about 30 - 35 years, which meant that the people who designed the tomb and laid down the first stones were probably well aware that they would never get to see it finished; it was their children and their grandchildren who finished the tomb and finally got to bury their dead inside. Indeed, the first occupants of the tomb were quite possibly the very people who started to build it in the first place.

The Neolithic house here predates the main tomb, and so does this smaller mound. Like the one behind you, it was found to be in the way when the main tomb was being built. But instead of ploughing straight through the smaller tombs, the builders accommodated them. The great mound curves in to avoid the small one behind you, and this one here was incorporated into it. The passage had to be altered when this was being done however. Again, this proves the respect they had for their dead. In this small tomb were found the remains of 9 adults, 7 children and a baby. Grave goods were also found in here, which included some Carrowkeel pottery and a broach pin made from the leg of a small bird. Carrowkeel is another megalithic cemetery in Co. Sligo and Carrowkeel pottery is a style of pottery normally only found there. So Carrowkeel pottery here at Knowth suggests contact, trade links, with people on the opposite side of the country.

As we climb these steps we travel forward in time by 4,000 years (that’s 500 years for every step you take!) where we have the foundations of the early Christian house, and you can see just how high the ground had risen by then. The whole site would have been at this level by the 8th century, so you realise how the smaller tombs had become forgotten after they had collapsed, and been completely robbed of stone, since even the foundation were buried by 2m of material. This Christian house was rectangular with stone foundations, but had wooden walls and a roof of thatch. It also had a souterrain, but this time, because of its length and winding nature, we believe it was used for defence reasons. The opening was covered by a mat, or a bed, or table, so that during the attack the occupants of this house could take refuge inside and hope that they would not be followed. The Vikings attacked Knowth at least five times during the 9th and 10th centuries, and as the capital of North Brega, this settlement was under constant threat from rival kingdoms, especially nearby South Brega.

Next we come to the medieval kiln which dates to the Norman period between the 12th and 14th centuries. It would have had a platform, possibly of linen, onto which grain was placed. A fire was then lit at the opening and as the warm air circulated into the kiln, the grain was dried so that it could be ground to make flour. It is the only visible remnant from the Norman period which you will see today.

Finally, I would like to talk about the Eastern Passage. This is the one which is cruciform, or cross-shaped like the passage and chamber at Newgrange. The passage here is more than twice as long though — about 40m, or 120ft. The chamber has a corbelled-vaulted roof, again like Newgrange. 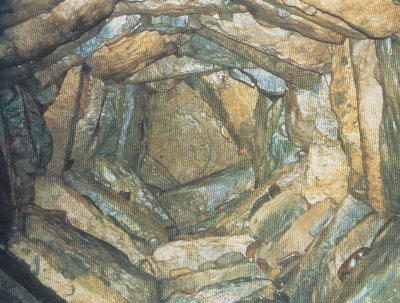 The term ‘corbelled-vaulted’ means that the roof was built by placing giant stone slabs in circular layers, with each layer slightly overlapping the layer beneath (a technique known as corbelling), so that as it goes up, the roof becomes narrower all the time until eventually it forms a dome or vault.

This roof has remained perfectly intact for 5,000 years without any mortar or concrete of any kind, and just like Newgrange, has remained completely water-tight for all that time. At Newgrange this was achieved by sloping the slabs at a downward angle and by carving narrow grooves onto the backs of the slabs to act as gutters. At Knowth, these grooves were not necessary because the stones and soil on top of the roof was packed so tightly that the cairn remained water-tight without them. 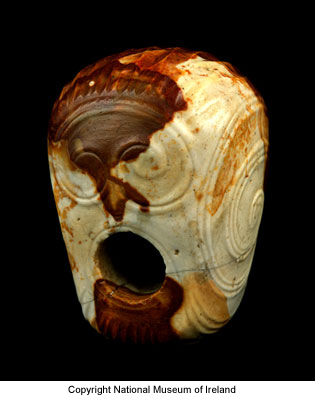 One of the most interesting finds at Knowth was this Macehead, discovered in the Eastern chamber in 1982 by a gentleman by the name of Liam O’ Connor. It was carved out of solid flint, which as you all know is an extremely hard stone since it was the metal substitute of the Neolithic people. More impressive still is the origin of this type of flint, the Orkney Islands off the coast of Scotland which proves that the people living around here 5,000 years ago were not isolated. They had contacts, trade links, with other Neolithic communities even beyond these shores.

The detail and craftsmanship of the Macehead is truly astounding. It seems to represent the head of a male figure, possibly a god, and it probably went on the top of a wooden staff and was used to lead ceremonial precessions.

Maybe it belonged to a high priest or priestess and was buried with him or her when they died. Or maybe it too remained in the chamber to frighten away the evil spirits. A replica can be seen in the Visitor Centre, but the real thing is in the National Museum in Dublin.

Now, I’m sure you all know that the passage and chamber at Newgrange becomes illuminated on the shortest day of the year; the Winter Solstice. Well Knowth gets lit up twice, on the same day, and on two days of the year. This passages at Knowth are aligned to the rising and setting sun of the Equinoxes in March and September, when day and night are equal in length. Unfortunately, the large farm house across the road, which was built in the 1860s, prevents this phenomenon on the mornings of the Equinoxes now.

We don’t know why the people who built these tombs wanted these chambers lit up on these special days, but they must have had a very good reason for doing it because it must have taken decades of planning and research, before they laid the very first stone of the tomb, in order to get it to work. Some believe that they simply acted as calendars, marking the changing seasons for these farmers.

Others believe that there was a much more spiritual reason for it; that they worshipped the sun as a god or a goddess and that the sun was entering the tomb to give life back to the spirits of the dead resting inside and to lead their spirits back outside to join with the sun, or to live on in the air around their living descendants. We just don’t know so, as with the art, every suggestion is valid since none can be proven.

The question remains as to who was buried in the main mound. Were they the most important people of the time, like the political and spiritual leaders and other wise people, while the more ordinary people were buried in the smaller tombs? The remains of about 200 people were found in the great tomb at Knowth, which is far more than Newgrange, but still relatively few for a large community so perhaps it was just for the elite.

On the other hand, perhaps everybody had a chance to rest in the larger tombs temporarily, so that once the sun had gone inside and brought new life to their spirits, the cremated remains could be brought back outside and then buried elsewhere, maybe in the smaller tombs. And perhaps this process was then repeated, year after year. Like so much here at Knowth, it’s open to interpretation and you can believe what ever you wish. No one can tell you you’re wrong, and no one can prove you’re right!

Back to Section 1 or Section 2.