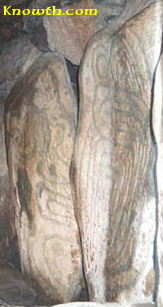 We are now standing near the Western passage of the main tomb. All the tombs in the Boyne Cemetery are passage graves. As the name suggests, a passage grave comprises a long, narrow passage made of vertical and horizontal stone slabs, which leads directly to a burial chamber at the end. The passage and chamber are then covered over by a huge mound, or what we call a cairn, made up of layers of stones, turves and soil. The cairn here at Knowth covers 1.5 acres and is one and a half times the size of Newgrange. In its day, the great tomb of Knowth would have been the largest man-made structure in Europe.

Unlike Newgrange which only has one passage, Knowth has two; one facing due east, the other due west. The Eastern Passage is called a ‘cruciform’ passage because the chamber at the end of it is divided into three side recesses, like the one at Newgrange, so the plan of the passage and chamber resembles a cross. Obviously, this has nothing to do with Christianity since the tomb was built three thousand years before Christ was even born.

The Western Passage is called an ‘Undifferentiated Passage’ because it’s hard to differentiate between the passage and the burial chamber itself. The passage is 34m or over a hundred feet long. Inside the chambers are basin stones upon which the Neolithic people placed the cremated remains of the dead. The bodies were burned outside, and then their ashes and bones were brought inside — perhaps on animal skins — and placed on the basin stones. Along with the ashes and charred bones, they placed grave goods. These were just everyday things which the deceased had when they were alive, including jewellery such as stone balls, coloured beads, pendants and necklaces made out of sea shells, as well as tools such as flint arrowheads, knives, chisels and scrapers. If these were not the actual possessions of the deceased themselves, they would have been final gifts, tokens of affection from family and friends left behind. If we had the same burial practices today, we would place wedding rings, lockets, photographs, maybe even mobile phones, on the basin stones.

The basin stone from the Western chamber is now stuck in the passage, because at some stage in the tomb’s later history, someone tried to remove it without realising that the basin stone was wider than the passage itself. The result was, that when they got it half way down it became stuck and has remained there ever since. It is believed that this occurred a thousand years ago in the Early Christian Period, so maybe it was Conan, Teimtennach or Snedges who made the blunder, or perhaps all three were in it together as part of a wild night out.

We can only begin to imagine the effort which the Neolithic people put into building this mound. They had to bring tens of thousands of tonnes of water-rolled stones from the banks and bed of the River Boyne, a thousand yards from of here, carrying them in wicker baskets. Then they had to get these giant boulders, or kerbstones, up here from the quarry at Tullyallen which is 15km or about 9 miles away. The kerbstones weigh anything up to 5 tonnes each! We think that they would have used a method known as ‘log-rolling’ which means they would have cut paths through the forests, then using the trees they had cut down made wooden rollers, placed these rollers side by side on the ground, and then hoisted the boulders on top. Then they would pull and push the boulders the entire distance from the quarry up to the construction site. It sounds fairly simple, but it you have 80 people pulling one of these stones, it would probably take them about three weeks to get it up here! There are 127 kerbstones around the base of the mound — thirty more than Newgrange — and hundreds more inside the mound itself making up the passages and the corbelled-vaulted roof of the eastern chamber.

Finally, they brought quartz from the Wicklow Mountains and water-rolled granite from the base of the Cooley Mountains at Dundalk Bay up here. The Wicklow Mountains are 80km or 50 miles south of here; a two hour journey by car today. But 5,000 years ago, that was a much bigger undertaking because about 98% of Ireland was covered in thick forests, and the horse had not yet been introduced to this country. So the best way they could get to Wicklow was to build tiny little boats out of animal skin and wood called coracles — and we have one at the Visitor Centre — and row these down the River Boyne for 14km ( 9 miles ) until they came to the mouth of the river at modern-day Drogheda, and then turn south and row down the Irish Sea for 50 miles, or 80km, until they came to Wicklow, gather a few of those stones in the bottom of their little boat and row all the way back. They then had to do the same to get to Dundalk Bay which is 50km (30 miles) north of here. These would have been dangerous, life threatening journeys, and it would have taken hundreds of them to get the stones needed up here. So we can only begin to imagine the dedication and commitment they had to what they were doing; it’s really quite impossible for us to grasp.

At Newgrange, the quartz and granite formed a spectacular wall at the front of the mound which was rebuilt in the 1970s, but here at Knowth, Prof. Eogan believes that these stones were set into the ground and perhaps formed a ceremonial walkway, or maybe a gathering area in front to the passage openings.

I want to talk about Megalithic Art next because two thirds of all the Megalithic Art in Western Europe is here in the Boyne Valley. But one third of all Western Europe’s megalithic art is found on this site — that’s about 300 decorated stones. Megalithic Art is simply art done on a big stone and the word comes from the Greek, Mega Lithos, meaning big stone. It was done using two methods: by scratching the stones with a piece of sharp, pointed flint (Incision), or by using a piece of flint and a stone hammer to pick the natural surface of the stone away and thereby form the patterns which you see here. This was called Picking, or Pocking.

We have no idea what the symbols on these stones mean, if they mean anything at all. Many people have their own theories, but none of these theories can be proven or disproven. To give you an idea how many different theories can be put forward, I will talk briefly about just one symbol, the spiral. The spiral is very common, not only here but throughout the world, and many believe that it represents the sun, which was incredibly important to these Neolithic people. Others have suggested that the spiral symbolises a gateway to the Otherworld or the world of the spirits: it literally spirals down into the underworld like a vortex or whirlpool. Another theory suggests that the spirals are a symbol of life: life is a labyrinth and we never know which way to turn, and life can never go back to where it was before, just like the spiral. Others think they are designed to trap evil spirits, because even today many cultures believe that evil spirits travel in straight lines, so if they hit a spiral they become trapped like a fly in a spider’s web. All these have been suggested by visitors like yourselves, and none can be accepted or rejected beyond a reasonable doubt.

A lot of the art was hidden, i.e. carved onto the reverse or underside of the stones. This was done on the stones you see over there, which have been taken out of the Western Passage to be recorded. Some believe that the artists were practising first until they became good enough to draw the art which would be seen; others think that they were recycled from earlier structures; while other people believe that the art was not meant for the eyes of the living at all — it was meant for the spirits of the dead and for the gods and goddesses that these people worshipped, so it did not matter that the living would never see it again.

The “OPW 1972” is obviously not original artwork done in the Neolithic. OPW stands for the Office of Public Works. OPW was carved onto some of the kerbstones of the satellite tombs during their reconstruction in order to distinguish between the original kerbstones and the ones which were replaced because they could not be found on site. While on the subject of modern alterations, I will draw your attention to this ledge around the main tomb which was put here to keep the rain water off the kerbstones, because rain can cause a lot of damage to them, especially in winter when it freezes. We also have this retaining wall around the perimeter of the mound which helps prevent cairn material slipping. Originally, the tomb would have looked like a much larger version of the smaller tombs behind you.