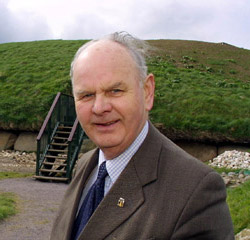 George Eogan is an Irish Archaeologist with particular interest in the Neolithic and Late Bronze Ages. A first degree at University College Dublin was followed by a doctoral thesis on Irish Late Bronze Age swords at Trinity College Dublin under Frank Mitchell. In the 1950's he worked with P.J. Hartnett on the Neolithic passage tomb at Fourknocks, and with Sean O Riordain at the Mound of the Hostages on the Hill of Tara. He was the Director of the Knowth Research Project and excavated at Knowth for more than 40 years as part of his investigation of the Passage Tomb builders in Ireland and Western Europe. Professor Eogan is a native of Nobber, Co. Meath in Ireland and has taught and lectured extensively on Irish archaeology.

The excavation at Knowth is one of the greatest pieces of archaeology of our time. On June 18th 2002 it was my privilege to be there with some students forty years to the day from the start of the excavation. After touring the site, George Eogan invited us over to a large caravan in the farmyard across the road to join the anniversary celebrations with Knowth trowellers, workmen and other local folk. This year I returned to Ireland to see George again, and to find out more about George Eogan. Why did he choose to spend the greater part of his life excavating at one site? And what was it like to be the first person in a thousand years to enter a great Neolithic passage tomb? More ...

You’ve been working at the site, on and off, for 50 years now. Is it slow, deliberate work or have there been any dramatic Tutankhamun-esque breakthroughs?
There were two such moments, in fact. Once, in 1967, we discovered a small hole on the western side of the mound. I uttered an exclamation, took my flash lamp and entered the passage. This, in turn, led to a very impressive chamber. The whole thing was over 100ft in length. It was very dramatic. The next year, we discovered a similar chamber on the eastern side. It was about 20ft high and extremely well constructed. More ...

Initially there was no evidence that the mound contained tombs. Having begun to excavate on its northern side, we gradually moved westward and by the end kerb, but these were suspected at the time to be associated with one of the nearby small passage-tombs. Leaving the site in August of that year, we had no definite clue as to the location of an entrance into the mound. More ...

At Knowth, however, the orientation of the great mound suggests that there could have been two ceremonies at different times, the vernal equinox on March 20th or 21st, and the autumnal equinox on September 22nd or 23rd. at these times, the sun rises and sets directly in the east and west, while day and night have equal lengths. The spring equinox represents the beginning of the growing season, and the harvest would have been gathered at the autumnal equinox. More ... 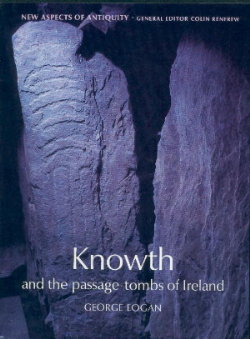 Knowth and the passage-tombs of Ireland by George Eogan.

George Eogan describes in vivid detail the dramatic discovery of not one but two tombs within the central mound, their narrow passages and decorated chambers hitherto unseen by man since ancient times. Built back to back, the tombs, George Eogan argues, were used for burials and very likely for ceremonies celebrating the rising and setting sun at spring and autumn equinox. Ritual deposits in the chambers included an exquisitely carved flint mace-head, hailed by experts as one of the finest pieces ever to come out of prehistoric Ireland.