Spirals within Spirals, Stones have Stories to Tell - Page 2

What of the design of that chamber at Newgrange? It was at the end of a long passageway and flared out into three smaller chambers, forming the shape of a cross, called by the curators, "cruciform." Was it a cross, or an "X," as in "X marks the spot"? I had heard that this cross or "X" shape had been found as a repeating pattern at the entranceways of some Palaeolithic caves. It somehow didn't surprise me that it predated the formation of the Celtic and the Christian cross, at Newgrange or at Pyrenees. It was often called the Sun Cross or the Solar Cross.

Before my visit here, I had assumed, like most everyone else, Newgrange was only a tomb. I'd always wondered why such a huge tomb? I'd reasoned that if the Egyptians could build a pyramid for a single person, then these ancients could do it too. It seemed an awful lot of effort, and because of this, it had to be forced labour. I would sigh, people never change. The history of mankind is the history of violence. Dictators will never go away. I would then conclude that the mounds were tombs and not think much of them. This thinking of mine was about to change with my visit.

From the literature on the walls and the movie, and from what Eileen had said, it seemed that Newgrange had also been built as a place to record the movement of the sun, even of the celestial canopy. It was described as an ancient astronomical observatory. I considered this. From casual reading, I'd known that throughout the generations of our species, there had always an outer teaching and an inner teaching, an exoteric path and an esoteric path. The sincere seeker of truth arrives at the inner teaching long after wresting with and questioning the outer. There is a transcendence from the outer to the inner and to what is real.

Then something began to dawn on me as I sat in the movie theatre: Newgrange is not just a tomb or an astronomical structure, it is also a symbol of man. It was a symbol for something within men and women, but what? The cruciform shape of the far burial chamber was a dead giveaway, but it was more than that. I knew what it was, but I didn't know how to describe it to my friend in words. This would begin to happen to me throughout the tour that day. I would continue to open. There were things that I would know, and not know. Insights. I would encounter these insights not just with my mind, but with my body. Much the same would happen with my friend this day, Eileen, but in a different way. Was there was an ancient and very artistic intelligence at work here, an outer and an inner meaning?

Spirals, not just circles, I thought. 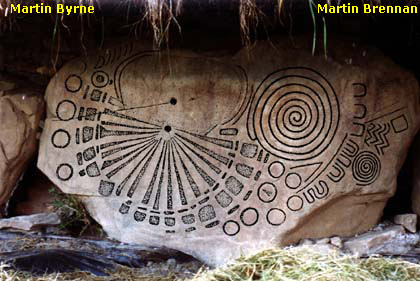 After the movie ended, we were invited to explore the life-size display of the passageway that led to the inner burial chamber, the same passage through which the beam of light would travel each solstice. I let myself walk into the passageway. I felt the walls with my hands. I thought of the cruciform shape. The light was very bright. In another moment, it didn't seem at all necessary to go to Newgrange that day.

I hadn't been in Ireland for a week and already she'd given me my name in Irish! I went off alone and sat in the museum and looked at the fake smooth rocks of the passageway. It seemed a symbol for something very near and dear to us. The spirals, here and with clients in the ocean, and with dolphins, pressed in on me. What was this symbol? Why not go to Newgrange? Newgrange was a very important archaeological site soaked in history.

It just wasn't necessary to go there today. Maybe we could return a few days later and go there. Then I knew why I didn't feel I had to go to Newgrange even though we had arrived late. In this moment, for me, Newgrange was also an esoteric symbol. For me, it was a symbol of the keen observation of the self, spelled with a little "s," an homage with a built-in annual reminder to us all to stay on the job of self-observation, to be aware. This was a symbol we each could draw upon, each day, no matter where we were located geographically. It was a nutrient for the inner man, the inner woman.

For me, the light that comes through the passageway to fill the chamber each year was a symbol for the light of awareness made good by the observation of the self. By little "s" self, if I may, I mean the self that is fraught with histories and miseries and complaints, always sticking up for its rights or trying desperately to please others just for effect, the self that makes us sick with worry and anxiety, the self that improves all others and then blames others for not improving enough, the self that is the ruin and terrible grace of mankind. This little "s" self is not composed of one Self, but many selves, today called sub-personalities, and these selves are often in conflict with each other. Newgrange and Knowth are not based on some popular fiction or motion picture.

As an artist and playwright, I had found these selves to be a constant source of dramatic material for the stage, even for comedy. As a hands-on healing artist, I had long seen them as a form of resistance in the consciousness of a client and/or patient to be dealt with very respectfully. This "self" is part of what the Buddhists traditionally call the "monkey mind." These little "s" selves are in each of us and can wreck havoc in personal and interpersonal relationships if not observed. We often don't know they are there, running the show. The challenge is to observe them, and in doing so, something happens. There is so much that we miss if we let these selves take over the observation of the self. In fact, they are not up for the job. When in the quiet of the circular theatre, I'd thought of a line from the Holy Bible: "If thine eye be single thy whole body will be filled with light." 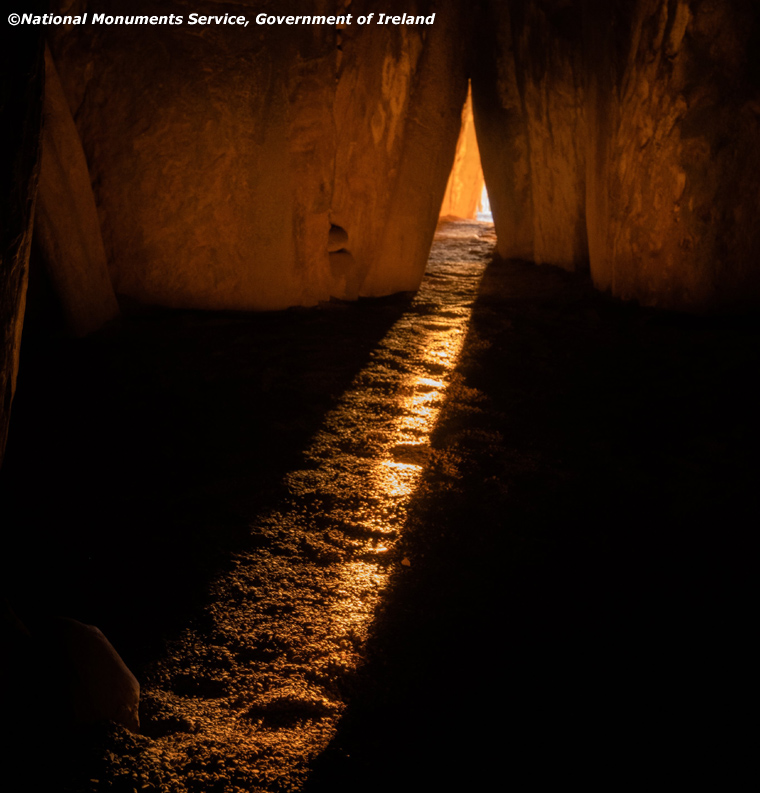 Newgrange was somehow a symbol for the inner man.

On another level, I knew that the meaning of these mounds had been interpreted millions of different ways since the days of the ancients, not to mention the jillions of interpretations of the Bible itself. I'd had a Southern Baptist upbringing in South Florida and wasn't taught to think this way.

While just at this Visitor Centre, with its mock-ups, I thought of another parable from the Holy Bible, "Straight is the gate and narrow is the way that leads to life." Or maybe it was from a book I'd read in high school by Andre Gide, Straight is the Gate. What were these Sunday School thoughts I was having? What could a later century's, "narrow is the way" have to do with some ancient mounds? I'd by now seen the pictures of Newgrange, Knowth, and even a mound called Dowth.

Who were these ancients? What was their purpose in doing all of this? Did anyone know? There was a wisdom rising up from my body and not in a linear fashion. It was almost a religious experience. And I was just a tourist. I looked for something else to do to take my mind off. It was as if a deeper intelligence was already at work within my own inner chamber. The challenge was to trust.

Eileen approached me at the gift store. I'd felt an impulse to buy an Irish tin whistle. It was for tourists, and I couldn't play it, but there was something about its musical connection with this place and the country that is Ireland. It was also set in the key of D. "Look, ‘D' for Dolphins," I said to Eileen. She laughed. "Let's go outside and wait for the bus."

I followed her out of the museum gift shop into the late afternoon sunlight. We took a footpath across a small bridge and walked over the Boyne river. I could see one of the great mounds in the distance, but didn't know which one it was. I didn't think to ask which one, for the sight had inspired and quieted me. We then walked to the place where people wait. There was a semi-circular concrete structure with a bench built into it. I stopped for a moment before sitting down with the other tourists gathered there, turned, and went back out to a small grass mound beside a fenced garden, closer to the museum. Eileen followed me. I contemplated the great mound I had seen in the distance, and then had a sense that there was nothing else those ancients could do but build that mound and exactly when they did. I said to Eileen, "There was nothing else they could but build that."

I didn't think that Eileen and I were sharing the same experience of the place that day. With her, everything seemed, "of course." But she wasn't an "of course" person at all. Eileen had warned me of the Irish sense of humour and especially that I had to learn some Irish if I was going to get by. So far, I had my name down in Irish, "Seamus," and Go raibh mile mile maith agat! Thank you very very much! As a first time visitor and wide eyed American with the soul of a visionary artist, Knowth would become a mind-altering event, more like science fiction than ordinary life. 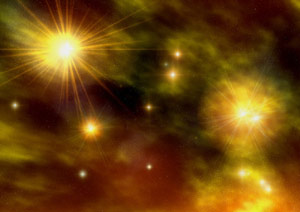 My journal says there was an odd sensation of my brain stem tingling. I first noticed it when I was crossing the footbridge to wait for the bus. When I had passed the well-kept garden, I touched the back of my head, above the nape of the neck, for it was as if my very brain stem were vibrating. The brain stem is part of the primitive brain, the R-complex, the first part of the human brain to evolve. Along with this tingling sensation, there was another sense that these ancients - the first builders from 3200 BC - had built Newgrange because there was nothing else they could do at the time.