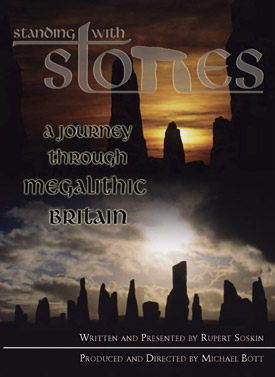 Standing with Stones - a journey through Megalithic Britain and Ireland.

The film is an exploration of the wealth of prehistoric sites in Britain and Ireland. Standing with Stones aims to give a fresh insight into our megalithic heritage extending far beyond the better know sites such as Stonehenge and Newgrange.

The 136 minute documentary film was written and presented by Rupert Soskin and produced and directed by Michael Bott. The film was researched, scripted, narrated and filmed by Rupert and Michael, including composing all the music and creating the computer graphics.

'Standing with Stones' explores the mysteries of Britain and Ireland's ancient stone circles, dolmens and passage tombs. The film which aims to give a fresh insight into our megalithic heritage extending far beyond the usual stopping off point of Stonehenge. The documentary is the work of just two men, an explorer and a filmmaker whose previous work includes documentaries on the Da Vinci Code. The entire 136 minute documentary, written and presented by Rupert Soskin and produced and directed by Michael Bott was researched, scripted, narrated and filmed by just the two men themselves, including composing all the music and creating the computer graphics.

Rupert Soskin, an explorer who has led three expeditions into the jungles of northern Colombia to visit the Kogi Indians, has also studied archaeology, anthropology and evolutionary psychology. He first met documentary filmmaker Michael Bott when Michael was working with Henry Lincoln (writer/broadcaster and author of The Holy Blood and the Holy Grail) on a film called Origins of the Da Vinci Code, and another called The Man Behind the Da Vinci Code, for Channel 5 and the History Channel.

Conceived eight years earlier as a project for television by Michael & Rupert, it was only three years ago that they decided to take the leap of producing it entirely themselves. It has taken over two years to research, film and edit the film and between them, the two have travelled well over 10,000 miles around Britain and Ireland, filming a breathtaking array of stone circles and monuments, from the Ballowall Barrow at the southern tip of Cornwall to the Tomb of the Eagles on Orkney.

Although the film doesn't profess to have all the answers, it stimulates interest in why they were built, how they were built and why there is such diversity in the arrangement of the stones in so many locations.


Standing with Stones - The Book

The companion book Standing with Stones: A Photographic Journey Through Megalithic Britain and Ireland published in 2009. Across the length and breadth of Britain and Ireland lies an unsurpassed richness of prehistoric heritage. Standing with Stones is a personal voyage of discovery, taking the reader to over a hundred megalithic sites in a photographic journey through the British Isles. The book is divided into regions, and each site featured is given its Ordnance Survey grid reference. Some, like Stonehenge and Newgrange, are well known and often visited, but many, such as Fernworthy and Bleasdale, are remote and barely known. Rupert Soskins stunning and original photographs act as windows into the past, which, together with his engaging and accessible text, encourage the reader to think afresh about the meaning and purpose of these monuments and at the same time open the eyes of travellers and enthusiasts to the great wealth and variety of henges, circles, dolmens, barrows and standing stones across the British Isles.

My name is Michael Bott and it has been my privilege to partner writer/presenter Rupert Soskin on the making of this film, as Producer, Director, Cameraman - and pretty much everything else! Neither of us is an academic - or even an expert - but our mission in making this film has been to share our enthusiasm and knowledge and to convey something of the thrill of standing with these ancient stones - stones whose purpose and meaning is tantalisingly beyond our reach, lost forever in time.

Ask most people about ancient monuments in Britain and Ireland and they'll know of just one or two - probably Stonehenge and Newgrange. Some will mention the big stone circle at Avebury. Others will tell of the stone circle or long barrow down the road from where they live. But few, very few, will be able to name more than a few of the thousands and thousands of Neolithic and Bronze Age monuments which litter the length and breadth of the British Isles.

You might think there would be little to say about inert, immutable stones. Yet as we got into the workflow of researching, writing, planning, travelling and shooting, with schedules evolving to account for weather, breakdowns and the unexpected, we found that the 'unexpected' mostly came from the Stones themselves.

However much research we did and no matter how sure we were of the words Rupert was going to say to camera, being there – standing with the stones – kept turning our preconceptions and our plans on their head. This was a joy and a wonder. The stones taught us to go with the flow. What astonished us, and what we hope will astonish you too, is the sheer variety and richness of landscape and story that they present to us.

This film has been more than two years in the making. Our little convoy of camper van and Land-Rover has zig-zagged its way up through England, Wales, Ireland, the Isle of Man, Scotland, the Western Isles and eventually to Orkney. We have visited well over 100 sites and between us travelled at least 12,000 miles. At last, after 8 months in the cutting room, we are finally able to share with you the fruits of our adventure. We loved making it, we hope you love watching it.

Sites featured in Standing with Stones