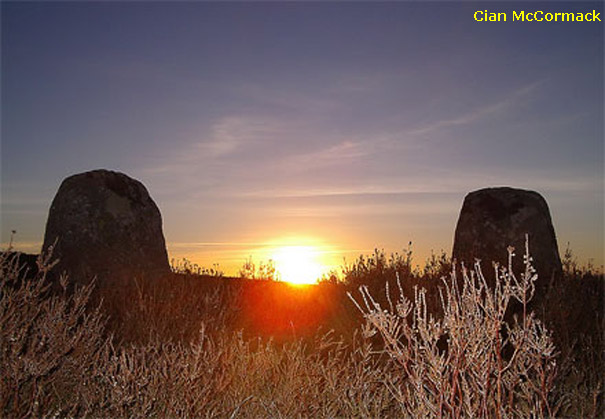 The Equinox Sunrise is framed by the Gossan Stones in the Wicklow Mountains, Ireland's Ancient East.

High above Laragh and the Glenmacnass valley in the Wicklow Mountains, on a North-South ridge between Paddock Hill and Scarr mountain are two of the most unassuming standing stones you would expect to see. The stones are set 1.75m apart (on a North-South axis), and stand little more than 1m high. I have seen more monumental gateposts in some of the nearby fields. They are commonly known as the Gossan Stones, a name that may derive from the Hiberno-English slang word 'gossoon' commonly used around the country to describe young boys or lads, a term that quite well describes the two stones. However, the burning question when I first saw them was what on earth were these doing all the way up here, in an area not known for prehistoric monuments.

When I was first brought by a colleague to look at these stones some years ago I noticed on our approach a U-shaped defile of the Devil's Glen in the distance. On arrival, and as we pondered the purpose of these stones I noticed that we were now looking out to sea straight through the Devil's Glen, due east. This glen is the East-West valley of the Vartry River as it drops dramatically from the Roundwood Plateau down to the coastal plain and the sea at Wicklow town. The Gossan Stones themselves are not aligned on the Glen. The stones are aligned North-South, whereas the Glen is due east. However, I was convinced that they must have been in some way marking the position of the sun as it would rise in the east through the Devil's Glen. Given that the Glen is due east of the stones, it seemed most likely that the alignment must occur on the equinox (i.e. 20th March or 22 September when the sun is midway between the winter and summer solstices).

A few failed attempts later, and finally on the 24th September, 2005 I was able to put my theory to the test. As I left the car at 5.50am the night sky above was an uninterrupted chorus of stars. By 6.30am I was at the site, and began setting up the cameras. However, by now my earlier spirits had faded and my heart was beginning to sink, for while the sky above me was clear, the horizon to the east was dominated by a bank of dark grey clouds which seemed to merge with the dark moody sea. As the minutes passed the sky became a blaze of different burning colours, but I became increasingly resigned to the likelihood that the clouds would sabotage any view of the rising sun.

Then, at 7.10am, almost without warning, I could make out an orange glow on the horizon, and very soon I could clearly make out the crown of the sun peeking above the sea. My heart began to race as I fumbled for my cameras, anxious that after all this effort I wasn't going to forget to capture my proof. Within three minutes the full disc of the sun became visible, sitting directly above the Devil's Glen as I stood between the Gossan Stones. No sooner had it appeared the sun now began to disappear quite quickly under the bank of clouds that hovered above the sea and which earlier I thought had scuppered my chances for another year. Then the sun was gone completely hidden by the cloud, bringing a definite closure to the spectacle.

The Gossan Stones are situated in an upland landscape, some 364m above sea level. Furthermore, because the sun rises on the sea, and allowing for the curvature of the earth's surface, from the Gossan Stones the sun can be seen rising slightly earlier than it would from more low-lying locations. The alignment in this instance is of course somewhat different from conventional standing stone monuments aligned on the rising or setting sun, in that the axis of the Gossan Stones is not aligned, but is rather perpendicular to the point where the sun appears on the morning of the equinox.

Therefore, rather than acting as an alignment with the rising sun, the Gossan Stones act as portals framing the sun as it rises in the east within the U-shaped profile of the Devil's Glen. The architects of the Gossan Stones could also have been achieved by placing them some 50m to the east, from where there are panoramic views of the Irish Sea. Instead, the Gossan Stones were set back to a location where a slight rise of ground level blocks a view of a v-shaped profile to the east-north-east, as if to prevent any confusion as to which profile, i.e. the Devil's Glen, the alignment is set.

This discovery that the Gossan Stones are marking a viewing point for observing the rising sun on the equinox is very significant, not least because it is the first discovery of this kind in Wicklow, but also because it adds to a small, but growing, number of prehistoric sites known to have equine solar alignments. As with all good stories, there is a twist. Some 3km to the NW of the Gossan Stones the Bellanagrana Brook rises on the slopes of Scarr Mountain and falls steeply down the Glenmacnass Valley to the west. The name in this case could not be the original name of the stream, and it is most likely that the stream took its name from a name that originally would have applied to a larger geographical area.

Given the clear evidence for a solar alignment at the Gossan Stones the second element of the name, i.e. 'grana', immediately jumps out as being significant. In 1945 Liam Price suggested that the name Bellanagrana derived from the Irish buaile na gréine (i.e. booley of the sun or sunny booley), though he also suggested that the first element of the name, based on the local pronunciation of the name, may have derived from the Irish word balla, a wall. Price would not have been familiar with the new evidence for a solar alignment at the Gossan Stones. In light of this it is now tempting to suggest an alternative explanation for this name that is directly related to the solar alignment itself. It is possible that the name derives from the Irish bealach na gréine, i.e. way of the sun, which may reflect the path of sun from sunrise to sunset as seen from the Gossan Stones. Alternatively, the name may derive from beal na gréine, the mouth of the sun, which of course could be seen to be an appropriate description of the sun as it is seen to rise up from Devil's Glen.