The Measure of the Cosmos 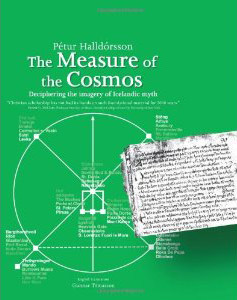 The Measure of the Cosmos by Petur Halldorsson. In recent decades, research into the conceptual background of the Sagas told in 13th century Icelandic skin manuscripts has revealed a pre-historic Image of Creation marked in the land by Iceland's 9th century settlers with exquisite geometric and mathematical precision. This book indicates that the Image of Creation brought to light recently in Iceland was an integral aspect of pre-historic Man's world-view evidenced in like manner in the patterns of settlement in many countries.

The book examines how geodetic surveyors must have paced and marked in the land the essential features of the ancient Image of Creation in an age-old ritual whereby pre-historic man settled virgin terrain. Here we will delve into the spiritual aspects of the morphology of antiquity, how the Icelandic esoteric heritage is reflected in numerology and related concepts in the symbolic Image of Creation which pre-historic Man marked in the land in Ireland, France, Denmark, Britain, Italy and Greece.

The book attempts to explain how landmarks in nature and the location of certain edifices were logically related. This is a journey into unfamiliar territory - that of the mental world of generations long since gone. We will encounter faded signposts and barely discernible tracks, along which we will try to move forward. More questions will arise than we can answer with certainty, but the journey is a purpose in itself - the search for an answer to a great puzzle. How did this blue-print of a Cosmic Image come into being and what was its purpose?

In the 8th century a distant island in the north Atlantic became the refuge of Irish hermits who sailed there on their skin boats to contemplate in the presence of the almighty. It remained a hidden land unknown to most Europeans for many decades, but offshoots of the continent's ancient culture had already reached it. A new European land was about to be born.

As the 9th century progressed, the island was visited by nordic warriors, vikings blown off course while sailing between Norway, Ireland, England and the Faroe Islands. Finally, it was settled in the late 9th century by people hailing from the fiords and valleys of Norway and from the viking colonies in Ireland and the British isles. Christians and heathens from the nordic countries, Ireland and England came together within a single cultural frame. A new European community was born, founded on a legacy of ancient knowledge - which had already been marked in the land by the Irish settlers.

In the 9th century heathen religious ideas had evolved over many millennia, one may assume therefore that the settlers acted in a traditional fashion as they measured the last Cosmic Image of its kind in the history of the world in Rangárhverfi. New lands and islands settled after the year 1000 were dedicated to Christ of the new religion. Thus, measuring of the Cosmic Image in Iceland marked the end of a multi-millennial era in the evolutionary history of mankind's religious traditions. The Sun's position late Spring in the northwest heralds the coming of Summer.

An idea of plenty had been associated with that point on the horizon from the first. This specific place of the Sun became a special symbol on the Sun Watch - the Cosmic Image - marked by ancient man on the land, great holiness became attached to the spot marking the coming of Summer. If one proceeds from the deserts of Egypt in the direction of the symbol of a New Summer, across the Mediterranean, across Europe until one comes to the shores of the Atlantic Ocean, the islands of Ireland and Iceland represent the end of the world in the north-west. For centuries, men may have pursued dreams about endless summer to that part of the world, sailing the last leg of that journey on Irish skin boats and later in viking ships. In this respect, the expectations of the ancient explorers may perhaps be reflected in tales about the Holy Grail in Ireland's Celtic mythical legacy imparted by Moses to the young Njall in the Egyptian desert.

In his book The story of the Irish Racehe, the Irish Nobelist Seaumas MacManus says that the Celts came originally to Ireland from Egypt, with stopovers in Crete and Spain - and the Scythian plains. The name of the Celtic nation, Gaedhal, which means glass, derives from the name of its patriarch, who called himself Gaodhal Glasir. When he was a child staying in the desert with Moses, he was bitten by a snake. Moses healed the wound and told him that, as an adult, he would discover a green island in the northwest where he and his descendants would settle, and that neither snakes nor any other poisonous animals would be found on this beautiful island.


The root of the word Danish, Dan, probabily relates to the Egyptian Dan tribe's path that can be traced northward through all of Europe, for it is marked by names containing Tan or Dan, such as: Mauritania, Lusitania in Portugal, Sardinia (Sar-don-i), Dannonnii which today is known as Cornwall, and Danmares, Denmark. In Ireland the royal residence at Tara is named after Tuatha de Danann, the nation of Dan. In Aarhus there is a mound called Jelshoje. At Tara similar mounds are called Dumha na nGiall, a concept akin to that of the mound of Njall, as they were known at Bergorshvoll in Iceland.

An Icelandic research by Einar Palsson suggests that all such mounds had probably been known as Mounds of Njall and that, accordingly, the name Jelling stood for Njaluvangur, (N)jelling, because all the mounds were important symbols in, and related to the numerological aspects of, their respective Images of Creation, their builders were linked through extensive cultural and family ties. The word Njall was probably a well-known symbol for King or Patriarch of the tribes which settled the lands of northwest Europe.

In his book Kyn, Einar Palsson summarizes Njall's northward journey: "The river Nile, whose name means dark blue, is known as Neilos in Greek and Nila in Arabic... When Njall's colors are described in Njalssaga they appear to be the color of the river Nile. The names Neilos, - Neelawos, - Neileos - and Neleus appear to have been transformed into Neil and Niall in Celtic settlements. Njall appears to have sailed down the Nile to Knossos in Crete, and from there to Pylos on the Pelopennese peninsula, whence he sailed to Venice, from where he walked across Gaul on the French side to sail by boat to the British Isles.

Much later he comes to the shores of Iceland via the creation myth of the Icelandic "godar" system of administration. The most noteworthy thing about Njall is not only that he is a famous link in myths, but that with him are associated the foundation of states as well as that science of antiquity which now is identified with Plato and Pythagoras".

The Bristol channel between Wales and Somerset may have been named Njalssea when the Celts first arrived there as suggested by local names. A town called Nialsea now stands on flatland south of Bristol which was the bottom of the Nailsea in antiquity. Local Njall's names in this agricultural area and in Glastonbury just to the south are indicative of close mythological links to Njall and Glasir, the ancestors of the Irish people.

Many ancient tales and topographical names reminiscent of Isis have allso been preserved in Iceland and Ireland as is to be expected for she was brought by migrating tribes towards the North of Europe. In the late classical period the Egyptian goddess Isis was known as Hera in Greece. In centuries to follow she was venerated in the temples of Rome under the name of Ira, representing the roots of the names of the two islands in the wild west, the sentinels of Europe to the West and North, Ireland, and Iceland.

Tales about a dream world on a green island of plenty in the northwest was maybe what kindled the journey of Njall and Isis through Europe until they could not travell further north in pagan myth. Their final destination, the Cosmic Image, on the flatlands of the Iceland delta is where it is appropriate to retrace their journey.

From a world dreamt of by early farmers in pursuit of plentiful store of food and security for their kin, the point on the Sun Watch where summer started. There on the Icelandic Sun Watch/Cosmic Image, the word Skalholt acquires a deeper meaning if viewed as a symbol of Earth's bounty at its most generous. As a place where Mother Earth's bowl ("skal") or horn of plenty promises to flow over.